On the Edge is Jane Jesmond's debut novel and the first in a series featuring dynamic, daredevil protagonist Jen Shaw. Although she was born in Newcastle Upon Tyne, raised in Liverpool, and considers herself northern through and through, Jane's family comes from Cornwall. Her lifelong love of the Cornish landscape and culture inspired the setting of On The Edge. Jane has spent the last thirty years living and working in France. She began writing steadily six or seven years ago and writes every morning in between staring out at the sea and making cups of tea.
Posted by Laura Besley at 13:09 1 comments

The Affair by Hilary Boyd

Summary (taken from the back cover): On the glamorous shores of Lake Como, Connie meets Jared.

She's married. He's young. But that doesn't stop the heat rising between them.

And so begins a long, hot, intoxicating summer where Connie succumbs to temptation - breaking her marriage vows.

At the end of summer, Connie returns to her husband, ready to put the affair behind her. 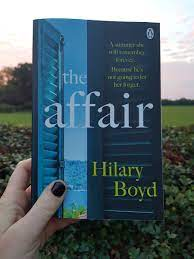 The Affair is the first book by Hilary Boyd I've read, but as an international bestselling author, I had, of course, heard of her books, especially her debut, Thursdays in the Park. Boyd is, I believe, known for writing old(er) people well. The Affair certainly fits that mould.

Elements of the story - and I mean this in a positive way - reminded me of the television series, The Split, starring Nicola Walker, in which we, as viewers and readers, are forced to look at relationships and question: what makes them work, what can we live with, and what can we live without?

Connie, the main character in The Affair, finds herself in a new phase in her long marriage: her husband has recently retired and this creates a different dynamic, a reminder that relationships are often not static, but shift and change in relation to intrinsic and extrinsic influences. Also, that no matter how many good years you have behind you, they can't always sustain you through tough ones. What initially seems like a little light relief for Connie from her problems at home, weighs more and more heavily on her shoulders until she buckles under the strain.

Hilary Boyd is one of those authors who makes writing a book look easy: her characters are fully formed, her dialogue is authentic, her descriptions of far flung places are divine and the narrative runs along at just the right pace. There is no doubt that achieving this is far from easy; that it does, in fact, take a tremendous amount of talent. Recommend The Affair if you're looking for a pacy read that deftly delves into the deeper, sometimes darker, side of relationships.

Many thanks to Sarah Harwood and Michael J. Books for my proof copy.

HILARY BOYD was a nurse, a marriage counsellor, and ran a small cancer charity before becoming an author. She has written eight books, including Thursdays in the Park, her debut novel which sold over half a million copies and was an international bestseller. The film rights have been acquired by Charles Dance, who will be directing and starring.