Or Gun Ho Fat Boy as I heard it pronounced recently. By mistake, I might add, by someone trying very hard to fit in, and failing (like almost all of us do when trying to speak Cantonese).

The New Year Begins
January 23rd was the first day of the Lunar New Year and this year is the Year of the Dragon (the Water Dragon to be precise). The Dragon is number 5 in the 12-yr cycle (Rat/Ox/Tiger/Rabbit/Dragon/Snake/Horse/Sheep/Monkey/Rooster/Dog/Pig). Unlike in Western cultures, the dragon is regarded as a divine beast - a symbol of good fortune and immense power. 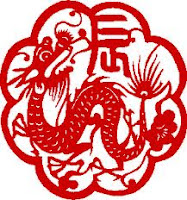 The Year of the Dragon
People born in the Year of the Dragon are supposedly the free spirits of the Zodiac. They are creative, free and uninhibited. The animals themselves are colourful, beautiful and flamboyant which in turn makes the people confident, fearless and successful. However, due to a high success rate they are reluctant to accept help from others and if not careful can burn out trying to put all their energy into every project they work on. Although their sparkling personalities attracts people, they are often most comfortable in their own company.

Water Dragons (1952 and 2012)
In addition to the 12-year cycle, there are also five elements within the Chinese Zodiac: metal, water, wood, fire and earth. Water has a calming effect on the spirited dragon, making him or her more patient and able to evaluate situations better.

How to celebrate Hong Kong style
The start of the new lunar year is the big celebration in Hong Kong. There are four public holidays and this is a time for cleaning, family, eating and fireworks. Nick & I went to put our recycling out on Sunday (first public holiday - a little like Christmas eve where people get their homes ready for the coming celebrations) and whereas normally the bins would be fairly empty, they were overflowing.

On Sunday evening we went round to a friend's place for hot pot. This is a popular and traditional method of cooking, similar to a fondue, but instead of using cheese or chocolate for a base, in the centre of the table is a simmering pot of broth or stew. We had thinly sliced beef, pork and lamb, noodles, dumplings of all varieties, different kinds of tofu and vegetables. I hadn't had hot pot since I visited my sister in Chengdu, China, in 2005. I think there it was oil-based as opposed to broth and I seem to remember it was very spicy! Eating hot pot is a very sociable way to eat and I can see why it's still very popular within Hong Kong and Chinese culture. 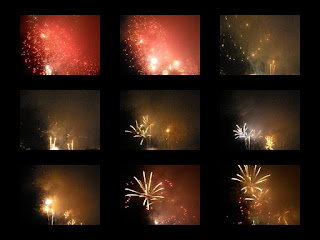 Last night we went out to see the fireworks. They were spectacular! We hadn't quite reached our spot for the start at 8pm, but they were so loud you could feel the reverberation in your throat. It was like being in a nightclub! There's nothing like watching fireworks in Hong Kong (except for maybe, strangely enough, Japan Day in Düsseldorf, Germany!) The explosion of sound and colour is amazing. We all stood staring at the sky like spellbound 10-year-olds.

This morning we watched the lion dancing from our living room window. I have seen lion dancing on a few occasions now, but I never tire of it. It's thrilling to watch. The lion is made up of two people who dance in sync with each other to the beat of the drums. Apart from jumping, climbing and doing general acrobatics, the lion is given a 'personality', for example: the tail may waggle or the ears may wiggle.

I love Hong Kong and there's not a better time of the year to be here with the explosions of noise and colour!