Set in Paris, this book has two main characters: Sarah, a 10-year old Jewish girl and Julia, an American journalist who is researching events of World War II. 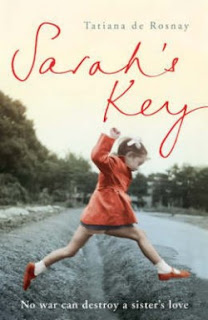 What I think about the BOOK


Fairly early on you can predict the fate of Sarah and her family, but yet reading about it - and all the harrowing details - is not boring. As Julia researches the events of the Vel' d'Hiv to write an article to commemorate the sixtieth anniversary of this atrocity, she becomes more and more affected by what she discovers. Coupled with a personal trauma, I found her a very sympathetic character.


I immediately felt pulled in by this narrative. For the first half of the book the two main characters take turns to be the centre of a chapter. This has the effect of not one, but two stories driving the narrative forward and both were equally compelling. I liked the fact that the different chapters, those of Sarah and Julia, were written in different styles and found this book to be a real page-turner.

What I Think about the FILM

Having read this book about six months ago I recently watched the film (director and screenplay: Gilles Paquet-Brenner). I always like to read the book first to allow my imagination to shape the setting and the characters. This does, more often than not, ruin the film. The best way round this is to wait a while. However, in this case I was not disappointed. The screenplay was phenomenally close to the original book to the point that I don't think anything was omitted or added unnecessarily.

Kristen Scott Thomas is wonderful in the screen version of Sarah's Key (original title: Elle s'appelait Sarah), which is a predominantly French film. She brings depth and the right level of emotion to the character of Julia. The other actors, including Mélusine Mayance who plays the young Sarah Starzynski, are also brilliant.

Tatiana de Rosnay was born in Paris and is of English, French and Russian descent. Since 1992 she has published eight novels in French. Sarah's Key was her first novel written in English and has already been translated into 20 languages.
Posted by Laura Besley at 08:00