All I Want for Christmas by Joanna Bolouri

Title: All I Want for Christmas

What if the love of your life was your best friend's girlfriend... and you were the one to set them up?

When Nick loses his job and is dumped by his glamorous but demanding girlfriend, he is forced to grudgingly accept work as a Santa at a local Christmas grotto. As his friends are getting married or promoted, Nick spends his days being terrorised by unfriendly elves and cried on by snotty, spoiled children.

Then he meets 4-year-old Alfie. All Alfie wants for Christmas is for his mum, Sarah, to be happy again. Moved by the boy's selfless wish, Nick arranges a date between Sarah and his best friend, Matt. But as Sarah and Alfie become part of all their lives, Nick realises that happiness for Sarah and Matt might mean heartbreak for himself. 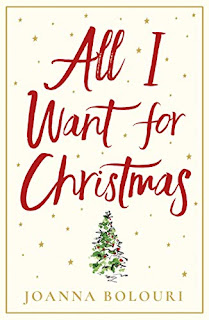 Joanna Bolouri throws her readers straight into Christmas and with it Nick's dire situation as we join him in the dressing room putting on his outfit for his first shift as Southview Shopping Centre's Father Christmas. Only in subsequent chapters do we find out which events led up to his donning of the festive Santa suit.

Nick and Matt's banter in the early chapters belied their deep friendship and I wasn't sure that I was going to like either of them. However, as the book progressed and more details of their pasts were revealed, I liked them both more and more, which is what made the book so compelling and difficult to put down, because although I was rooting for Nick, I didn't want Matt to get hurt either.

All I Want for Christmas is a lovely festive novel with a wonderful cast of characters. If you're looking for something to read on a dark evening in the run up to Christmas, look no further than Joanna Bolouri's latest novel. 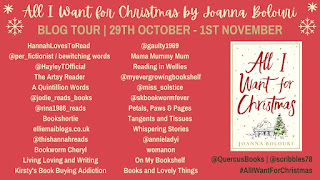 Thank you to Katya Ellis at Quercus books for my ARC in return for an honest review. 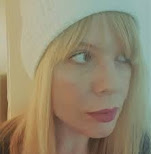 Joanna Bolouri worked in sales before she began writing professionally at the age of thirty. Winning a BBC comedy script competition allowed her to work and write with stand-up comedians, comedy scriptwriters and actors from across the UK. She's had articles and reviews published in The Skinny, the Scottish Sun, the Huffington Post and HecklerSpray. She lives in Glasgow with her daughter.