An Act of Love by Carol Drinkwater 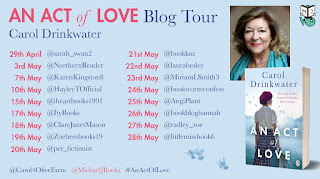 Title: An Act of Love

Forced to flee war ravaged Poland, Sara and her parents are offered refuge in a beautiful but dilapidated house in the French Alps. It seems the perfect hideaway, despite haunting traces of the previous occupants who left in haste.

But shadows soon fall over Sara's blissful summer, and her blossoming romance with local villager Alain. As the Nazis close in, the family is forced to make a harrowing choice that could drive them apart forever, while Sara's own bid for freedom risks several lives . . .

Will her family make it through the summer together?

And can she hold onto the love she has found with Alain?

By turns poignant and atmospheric, this is the compelling new novel from Sunday Times bestselling author Carol Drinkwater about the power of first love and courage in our darkest hours. 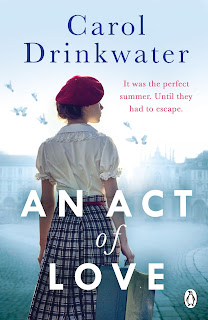 Why do we read? Why do you read? The reason I read is because I want to be swept up in the lives of characters I've grown to love and root for; I want to be taken to a place that I may never be able to see with my own eyes, but through the eyes of the characters, feel I've been to; and I want to learn something that I didn't even know I wanted to learn. This is why, for me, An Act of Love was the perfect book.

Sara is a wonderful character and along with the fear that she lived with on a day-to-day basis, she was also 'just' a teenage girl learning about herself and her place in the world. It would be easy to make her perfect, but what I think Drinkwater has done perfectly, is make Sara flawed. There were times I was frustrated with her and the things she did or didn't do, said or didn't say, felt or didn't feel, but then I remembered that these are the best characters; the ones who don't act the way they should, but act the only way they can.

An Act of Love is set in La Ville-Vésubie, a small village high in the French Alps. Not only is place extremely important in this novel due to its historical background, but it plays an important role in the development of Sara's character. As she learns more about her surroundings - the plants and trees, animals and waterholes - we feel her embedding in her makeshift home.

Through Drinkwater's adept storytelling of Sara, I have learned about the unique history of the Alpes-Maritimes department in WWII. Years ago I read Sarah's Key by Tatiana de Rosnay about the rounding up of Jews in Paris in 1942. That is a story that has always stayed with me and I know An Act of Love will be joining it.

Beautiful, eye-opening and compelling, An Act of Love is a book not to be missed. 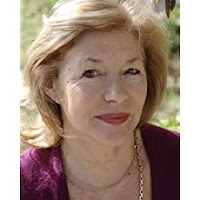 Anglo-Irish actress Carol Drinkwater is perhaps still most familiar to audiences for her award-winning portrayal of Helen Herriot in the BBC series All Creatures Great and Small. A popular and acclaimed author and film-maker as well, Carol has published nineteen books for both the adult and young adult markets. She is currently at work on her twentieth title.

When she purchased a rundown property overlooking the Bay of Cannes in France, she discovered on the grounds sixty-eight, 400-year-old olive trees. Once the land was reclaimed and the olives pressed, Carol along with her French husband, Michel, became the producers of top-quality olive oil. Her series of memoirs, love stories, recounting her experiences on her farm (The Olive Farm, The Olive Season, The Olive Harvest and Return to the Olive Farm) have become international bestsellers. Carol's fascination with the olive tree extended to a seventeenth-month, solo Mediterranean journey in search of the tree's mythical secrets. The resulting travel books, The Olive Route and The Olive Tree, have inspired a five-part documentary films series entitled The Olive Route.

Carol has also been invited to work with UNESCO to help fund an Olive Heritage Trail around the Mediterranean with the dual goals of creating peace in the region and honouring the ancient heritage of the olive tree.