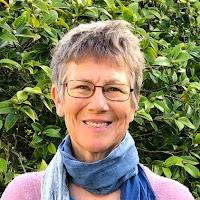 On the Edge is Jane Jesmond's debut novel and the first in a series featuring dynamic, daredevil protagonist Jen Shaw. Although she was born in Newcastle Upon Tyne, raised in Liverpool, and considers herself northern through and through, Jane's family comes from Cornwall. Her lifelong love of the Cornish landscape and culture inspired the setting of On The Edge. Jane has spent the last thirty years living and working in France. She began writing steadily six or seven years ago and writes every morning in between staring out at the sea and making cups of tea.
Posted by Laura Besley at 13:09