About the Book
Written as a controversial open letter to Osama bin Laden, this novel is a roller coaster ride of emotions in the aftermath of a London bombing, wherein a young mother loses both her husband and son. Wracked by grief she tries to do her part for the Anti-Terrorist campaign and takes a job with the police. Whilst London is preparing for further attacks she is dealing with her own; from unrelenting grief and from the posh couple who live in the adjacent estate to her council block: Jack Black and his girlfriend Petra Sutherland. Her involvement with this couple, as well as her involvement with her boss, Terence Butcher, lead to further complications in her life and drive the narrative forward. As we near the end a startling discovery is made and this forces the distraught woman to do something she might regret forever.

Incendiary is wonderfully written and stylistically it's an amazing accomplishment. The different voices of the characters can be clearly heard. As well as being heart-breakingly sad, it's also laugh-out-loud funny and I found the deeply flawed main character extremely endearing.

Incendiary (2006), Cleave's debut novel, was an international bestseller published in 20 countries to critical acclaim. It has been made into a film, of the same name, starring Michelle Williams and Ewan McGregor. Incendiary gained notoriety for the macabre coincidence of its UK publication on 7th July 2005, the day of the London terrorist bombings. 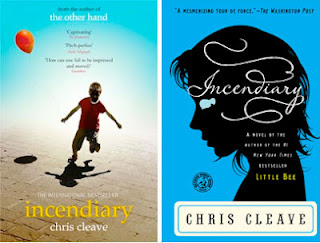 The reason I chose to download this book to my Kindle was because I had had two previous experiences with Chris Cleave's work and found them both utterly inspiring. The first was reading another novel written by him, The Other Hand or published as Little Bee in the U.S. Details have obviously faded, but I think the story will stay with me for as long as can remember. It was such a powerful story and told in such a beautiful way, that you almost forgot that there was a tragedy at the heart of it.

The second time I encountered Cleave's work was when I was doing NaNoWriMo last November and he wrote the one of the 'Pep Talks'. Not only did he offer his own support, but he answered questions that had been posed to him on Twitter, giving useful, practical answers with examples from his own life and writing. It's always encouraging to hear about professional authors who have also struggled to complete a project as it gives you hope you can do the same! 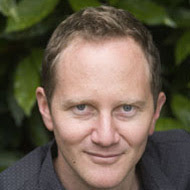 Chris Cleave was born on 1st January 1973 in London. As well as a novelist, he is a columnist for The Guardian newspaper in England. Incendiary won the 2006 Somerset Maugham Award and was shortlisted for the 2006 Commonwealth Writers Prize. His second novel, The Other Hand/Little Bee (2008) was, among others, short-listed for the 2008 Costa Novel Award. His third novel, Gold is eagerly awaited and to be released in June in the U.K. and July in the U.S. Chris Cleave lives in London with his wife and three children.
Posted by Laura Besley at 11:03