The Lip by Charlie Carroll

Away from the hotels and holiday lets, there is an unseen side of Cornwall, where the shifting uncertainties of the future breed resentment and mistrust.

Melody Janie is hidden. She lives alone in a caravan in Bones Break: a small cliff-top on Cornwall's north coast. She spends her time roaming her territory, spying on passing tourists and ramblers, and remembering. She sees everything and yet remains unseen.However, when a stranger enters her life, she is forced to confront not only him but the terrible tragedies of her past.The Lip is a novel about childhood, isolation and mental health, told in the unique and unforgettable voice of Melody Janie. 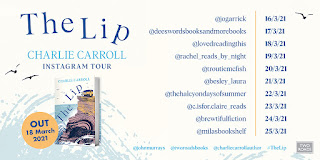 What I Think
Don’t judge a book by its cover, they say, but the moment I saw ‘The Lip’ by Charlie Carroll, I fell in love with its breathtaking beauty and knew I wanted to read it.
“I have often wondered what she thought of in those last moments. I like to believe that if she thought of anything, it was of my land, of the overwhelming beauty of it from the lip. And then I hope she thought of nothing at all. Because there is peace in that.” (p.1)
This is the story of Melody Janie who, due to recently tragedies, lives alone in the safe haven of her little caravan on a remote stretch of her beloved Cornish coast, Bones Break. Resentful of the tourists who invade “her land”, she is not only unwelcoming, but actively tries to discourage them from staying and/or returning. When a stranger moves into a nearby empty cottage she is forced to confront what lies beneath the surface of her precariously constructed life as well as trying to unearth the stranger’s secrets too.
Most of the chapters in ‘The Lip’ are short, a few pages at most, a lot of the sentences too, which has the dual effect of adding to Melody Janie’s erratic way of living as well as providing a stark contrast with the sea, the sky, the cliffs, which are, themselves, almost endless; Nature, in effect, being as much a character in the story as Melody Janie.
The opening chapters of ‘The Lip’ are deceptive, the seemingly simple life of Melody Janie and the love of her land are merely the beginning of this beautiful, but heart wrenching story. Layered like Russian dolls, Carroll deftly prises open the secrets of Melody Janie’s life as the narrative progresses, taking the reader on a journey down to unexpected depths.
The stranger Melody Janie encounters and befriends, almost against her will, lends pace to the narrative of this otherwise quiet and gentle book. As readers, we are swept up in Melody Janie’s obsessive quest to unearth his true identity.
Don’t judge a book by its cover, they say, but this cover did the book justice. ‘The Lip’ by Charlie Carroll is beautiful and breathtaking, harsh and heartbreaking, but more than anything it is a story about friendship and love, for each other and ourselves, and hope. In those things, I want to believe there is peace for Melody Janie.
About the Author 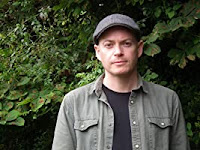 Charlie Carroll is the author of three non-fiction books: The Friendship Highway (2014), No Fixed Abode (2013) and On the Edge (2010). He has twice won the K Blundell Trust Award for 'writers under 40 who aim to raise social awareness with their writing', wrote the voice-over for the TV series Transamazonica (2017), and is one of the Kindness of Strangers storytellers.
His debut novel, The Lip, is out in 2021.
Follow Charlie on Twitter @CharlieCarroll1 or visit his website www.charliecarroll.co.uk.
Posted by Laura Besley at 16:31