This Poem Here by Rob Walton

Summary (taken from the back cover): When Rob Walton went into lockdown, he didnt know that he would also go into mourning. Here he writes about the life and death of his dad, and how sadness seeped into various aspects of his life. He also manages cheap laughs, digs at the government, celebrations, unashamed sentimentality and suddenly disarming moments of tenderness. 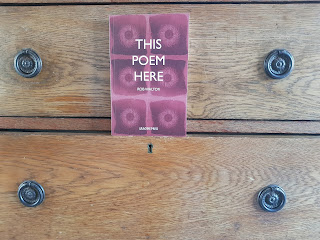 'This Poem Here' contains poems written during the turbulence of lockdown and Covid-19. According to the author, most of the poems were written in real time as a reaction to something seen or heard, something else to push us to our limits, and many of them appeared in real time on the author's social media accounts.

In 'Prime Minister's Questions' Walton asks: "Are there any other countries you'd like to break?/If you grow it out a bit, would you like me to cut it into a bob?" striking a balance between two absurds: the absurdity of the current dire situation and the person behind clearly not making the current dire situation any better. In fact, making it worse.

Another real time poem is 'Hey Due, Don't Diss Don's Disinfectant Facts', which opens with "A dose of Dettol/will hopefully settle/all your ailments." and continues to amuse with all the products we could try, apart from "Zoflora and Jeyes Fluid [which] are buggers to rhyme", to help prevent us from getting Covid-19.

This is a wonderful pamphlet of poetry that will break you and put you back together again, allowing us to hope that some time soon, "Eve will be in Dubrobnik."

Rob Walton is from Scunthorpe, and now lives in Whitley Bay. His poems, flash fictions and short stories for adults and children have appeared in various anthologies and magazines. This is his first collection. His publishers include the Emma Press, Bloomsbury, Frances Lincoln, Harper Collins, Butcher's Dog, Smith/Doorstop, Dunlin Press, Dostoyevsky Wannabe. He has also written scripts, a pathway and columns for Scunthorpe United's matchday magazine. He sometimes tweets @anicelad. Arachne Press were first introduced to Rob through his short stories which have appeared in many of our anthologies, most recently Time & Tide. He first offered us poems for An Outbreak of Peace and we've been hankering after more ever since.