Summary (taken from the back cover): Dreamers, singers, heroes and killers, they can dazzle with their beauty or their talent or their unmitigated evil, yet inside themselves, they are as frail and desperate as the rest of us. But can you see them? Can you unravel the truth?

This book is dedicated to the victims of violent crime, the struggle against discrimination in all its forms and making the world a better place for our children. That is why 30% of all profits will be shared between Stop Hate UK, The North East Autism Society and Friends of the Earth. 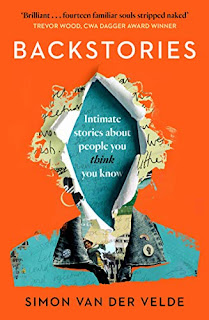 I love the premise of this collection: each story depicts a famous person, or a person who at least is well-known in history, and explores a moment in their lives that may have been pivotal, or have led to them becoming the (famous) person that they became. Not only are the stories well-written and compelling, it's like playing detective; picking up on the clues Van der Velde leaves scattered throughout.

The first story, 'The Guitar', is about one of my favourite musicians of all time, so I was immediately emotionally invested in this collection. "No doubt about it," Van der Velde writes, "he was a bright kid, talented even. [...] But he was a Jew, and he was short. I mean like really short." At this point I was 90% convinced who it was, but as the story unfolded and we learned "what it was to feel small and weary", there was no further doubt. I won't give anything away, of course, but do you know who this is?

Another of my favourites is 'Preserved in Amber'. Again, this is for completely personal reasons. My maternal grandparents are Dutch, in fact my grandmother's surname was also Van der Velde, and knowing the history of this family, I knew who this story was about  within the first two paragraphs. I'd like, however, to draw attention to the opening line of the story, which I think carries the reader so well into the time and place in such precise detail. "Brown paper package clutched beneath his coat, the middle-aged man creeps up the staircase, his well-made, worn-out shoes landing with exaggerated care on each bowed stone step."

Van der Velde is a master at 'voice', each story distinct and unique. 'Jive Talkin' opens with "I'm wheelin my bike along the sidewalk, watchin all the white faces, watchin me. This pinched kinda woman gives me a glare and then her man bumps me onto the road. I shrug like it don't bother me none, but I can't help thinkin Daddy was right. Only a damn fool goes up west of Walnut Street." This strong voice carries throughout the story, as do the others.

Backstories is a wonderful and unique collection of short stories that I thoroughly enjoyed and would highly recommend. 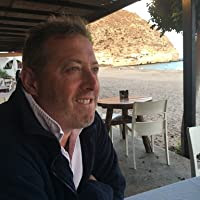 Simon Van der Velde has worked variously as a barman, laborer, teacher, caterer and lawyer, as well as traveling throughout Europe and South America collecting characters for his award-winning stories. Since completing a creative writing M.A. (with distinction) in 2010, Simon’s work has won and been shortlisted for numerous awards including; The Yeovil Literary Prize, (twice), The Wasafiri New Writing Prize, The Luke Bitmead Bursary, The Frome Prize, and The Harry Bowling Prize – establishing him as one of the UK’s foremost short-story writers.

Simon now lives in Newcastle upon Tyne, England, with his wife, labradoodle and two tyrannical children.