Summary (taken from the back cover): At the center of Foregone is famed Canadian American leftist documentary filmmaker Leonard Fife, one of sixty thousand draft evaders and deserters who fled to Canada to avoid serving in Vietnam. Fife, now in his late seventies, is dying of cancer in Montreal and has agreed to a final interview in which he is determined to bare all his secrets at last, to demythologize his mythologized life. The interview is filmed by his acolyte and ex-star student, Malcolm MacLeod, in the presence of Fife's wife and alongside Malcolm's producer, cinematographer, and sound technician, all of whom have long admired Fife but who must now absorb the meaning of his astonishing, dark confession.

Imaginatively structured around Fife's secret memories and alternating between the experiences of the characters who are filming his confession, the novel challenges our assumptions and understanding about a significant lost chapter in American history and the nature of memory itself. Russell Banks gives us a daring and resonant work about the scope of one man's mysterious life, revealed through the fragments of his recovered past. 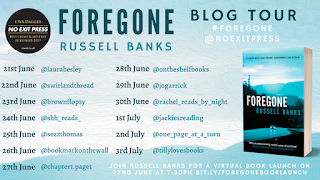 The book launch for FOREGONE is happening tonight, Monday 22nd June @7.30pm.
It's free to attend and here's the link to sign up!

In Foregone Leonard Fife drifts between two close third person present tense narratives to tell the story of his life and the secrets held within it. By using this technique, and omitting speech marks, Banks has effectively blurred the lines between past and present, speech and thought, creating a world that teeters, purposefully, on the brink of confusion.

'Only liars know what they have said.'

Truth, or the aversion of truth, is at the heart of this story. Fife chooses to be filmed, because 'in private he can't keep himself from lying to [his wife, Emma] and what he says in private is 'both true and false and neither.' Through Fife, Banks has created a deep and interesting exploration of who we are, how much of ourselves we reveal to others and the roles we play, willingly or not, conscious or not, with the different people in our lives and ultimately, the need to be known, and loved, for who we truly are.

'Once you cross the border, you're starting your life over. There's no turning back.'

In some ways, the border between America and Canada, which plays a pivotal role in who Leonard Fife becomes, is the least important. There are many other borders crossed in 'Foregone', which precede this one and are equally momentous in how they shape his life and character.

'There's no such thing as the end of childhood.'

Fife's focus during his interview narrative with Malcolm is centred around his experiences as a young man, from his late teens up to his late twenties. As readers, we only gain snippets of his childhood, but, as is the case in reality, we can feel how much it has shaped Fife and continues to permeate his life, his decisions, his feelings and his essence of what it means to be a person capable of giving and receiving love.

Foregone is a fascinating and in-depth read of a character's ability to construct and deconstruct his life along with his need to be accepted, known and loved for who he truly is. 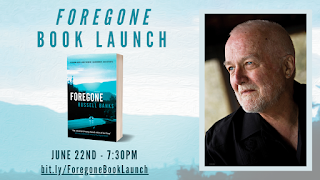 RUSSELL BANKS has published ten novels, six short story collections, and four poetry collections. His novels Cloudsplitter and Continental Drift were finalists for the Pulitzer Prize. Two of Banks's novels have been adapted for feature-length films, The Sweet Hereafter (winner of the Grand Prix and International Critics Prize at the 1997 Cannes Film Festival) and Affliction (which earned a 'Best Supporting Actor' Oscar for James Coburn). Banks has won numerous awards for his work, among them a Guggenheim Fellowship, National Endowment for the Arts Creative Writing Fellowships, O. Henry and Best American Short Story Award, and the Literature Award from the American Academy of Arts and Letters.

One of America's most prestigious fiction writers, Russell Banks was president of the International Parliament of Writers and is a member of the American Academy of Arts and letters.